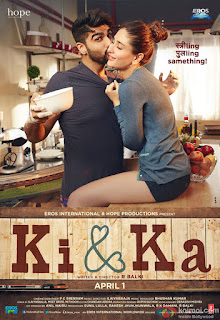 Directed and Written by : R. Balki
Produced by:R. Balki/R K Damani/Rakesh Jhunjhunwala/Sunil Lulla
Starring:
Arjun Kapoor as Kabir
Karina Kapoor Khan as Kia
Swaroop Sampat as Mother of Kia
Rajit Kapoor as Father of Kabir
I am surprised with the kind of movies that are coming from Bollywood and Lollywood these days. Ki and Ka is one such film that belongs to genre of light rom com movies.


This film is about what happens, when a man (Kabir) who wants to be a house husband and a workaholic career obsessed woman (Kia) gets into a relationship. Script is very well written and doesnt drag at all ( usually what happens to such movies).The whole film is about the evolution of the unique setup that Kabir and Kia are into and how it gets to the point, that director wants to prove throughout the movie. What that point is, I will leave it to you to figure out.

If you reverse the roles of  Kabir and Kia, this movie will become ordinary and feels repetitive. for example: In movies we have seen many times ,a housewife trying to find another source of income with in her means to support her husband but for the very first time you will see a husband do the same in a film and that makes this movie entertaining. 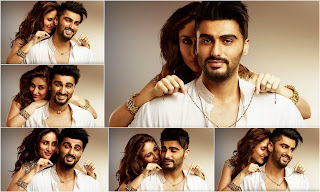 Direction is good and I really liked the rhythm/flow of the movie. Arjun Kapoor is very convincing in his role as a house husband, but Kareena has exceeded expectations definitely one of the best performances of her career. Mom of Kia and Father of Kabir have done exactly what was required from them. Plus there is a surprise element in the movie, one of my all time favorite couple  makes a cameo.

Production quality up to the standards as expected and I simply loved the train station inspired apartment.
Music is ok , could have been better. I like the placements of the song though. High heels is definitely a chartbuster.
I could totally relate to the move and that made it even more entertaining. Its a must watch for couples in their 20s and 30s. This movie is definitely going to be in list of my all time favorite home movies next to English Vinglish.
Posted by Awaken at 3:23 PM 1 comment: 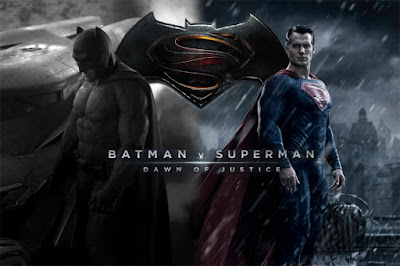 Desi Rating : 2/5
Directed by : Zack Snyder
Produced by:Charles Roven/Deborah Snyder
Written by: Chris Terrio/David S. Goyer
Starring:
Ben Affleck as Bat Man
Henry Cavill as Super Man
Amy Adams as lois lane
Jesse Eisenberg as Lex Luther
Gal Gadot as Wonder Woman
I usually review a movie in a structured way starting from story to acting to production but for this movie I think I can only review as a really disappointed fan.  I grew up around Batman, Superman and Spiderman. In 90s there was no Captain America , Iron Man, X men in the part of the world I belonged to and that's why to see your favorite characters not up to the level they deserve hurts.
I entered cinema expecting same great story line with twists and turns, some amazing production/CGI, epic action and above all some entertainment. I did get some bits and pieces of things here and there but may be I had really high expectations from the movie. 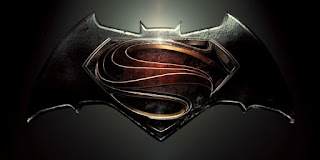 One cannot categorize this movie as a super hero movie, it felt more like a drama film. I still don't understand why the DC movies lack the spark and excitement that Marvel movies create. Batman and Super Man are two most iconic characters, they are already  way more interesting & intense with a lot more to offer compared to Captain America or Iron Man, yet compared to Avengers this movie seemed like a kids school play.
Story line doesn't make sense. Movies starts with political drama regarding what to do with Superman which for some reason is lost during second half, then we have batman whose story gets so confusing between reality & dreams that one cannot develop the connection with the character. Lex Luther character is not evolved as a villain should I never understood what is his feud with Superman or Batman. Lois lane is really not required in this movie. Story line is all over the place, how on earth can having a common mother's name change u in a split second from foe to friends.
Then there are dream sequences. Both superman and batman for most part of the movie were having dreams which I didn't understand at all. Editing is so poor that I couldn't connect one scene from the other at times.

The fight in the end gets exciting only when wonder women joins them , who by the way is completely wasted in this film. Fight between Superman and Batman which was suppose to be the peak of the movie is so bland that I almost slept in that part.
Second problem I had with the film was continuous night and rain. the whole film is so dark and dull that I never actually understood what's happening especially during the action sequences.
We also have a very lame introduction to the justice league close to end as well by this point I was dead with disappointment.
After watching this one I believe when it come to entertainment  we should stick to Marvel world only and leave this one for hard core nerds and fans who would really understand the drama, darkness and action that this movie has to offer. 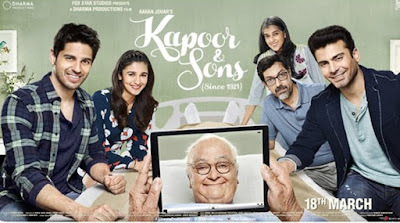 
Finally a complete drama film with all the right ingredients from Bollywood.
This film is not about a boy & a girl or a love triangle or parents & kids relationships etc. but is about all the characters in a family and how their relation ship is evolves through all the misunderstanding / doubts and conflicts.

This Story is about a family that has a shameless grand father who is watching videos of Mandakini on tablet through out, a father who is struggling to provide for family after retirement, a mother who believes she can do much more but looks up for family support, a perfect son who is trying to live up to expectation and another not so perfect son who is a struggling to get to where his brother is and what happens when they all get together after 5 years. 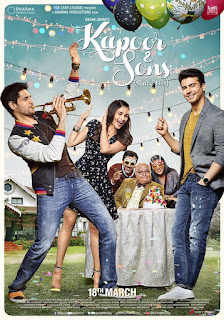 The Plot is not complicated its the character which are complex and move the story forward. Dialogues are ordinary but impact full and that is exactly what is required from a drama film. What I love about the movie is how it seems like our story. There was a moment in the film where Fawad Khan was trying to sort out issue between his Mom and Dad who were fighting and when his uncle asks is every thing Ok and he replies with so much calm that every thing is fine don't worry. Which reminded me how for every How are you? reply is always that we are fine regardless of what battles we might be fighting in side.

Every single person in the movie has done justice to their roles but I would like to special mention Fawad Khan, Alia Bhatt and Rishi Kapoor who I believe have lived their role to the extent that I started to believe I am part of their family.They definitely deserve prominence next award season.


Director has done a great job in taking the character through the not so complex plot and yet keeping a very realistic tone to the film. There is no over the top melo-drama and sentiments and that what will keep you engaged in movie.
Music is superb and blends well with the film. 'Larki beautiful ker gaee chul' is still playing in my head.
If you are looking for a masala movie with item numbers, extra ordinary lovers and emotional mother etc. this is not your film. Over all a great movie with good looking cast with great acting, superb music and perfect direction, such combinations are very rare in this genre and every one should experience at least once what they offer.
Posted by Awaken at 11:42 PM 1 comment: