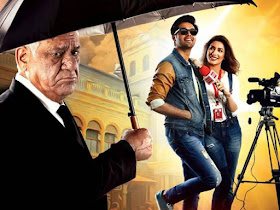 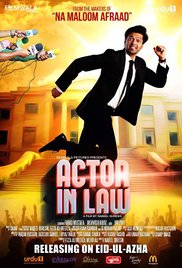 I am happy with the kind of films coming out of Pakistani film industry these days. Nabeel Qureshi's 'Actor In Law' is a satire on today's political and social scenario of Pakistan. It's a good intention film staying true to 'message with entertainment' concept. Fahad Mustafa is shown as a struggling actor who is having trouble getting noticed even with his own father, portrayed convincingly by Om Puri. Later he realizes his acting has a lot more worth in Pakistan court rooms and with support from an upright journalist Mehwish Hayat, he starts poking into major Karachi issues. This makes a lot of people in media and political arena angry and they start to work against him. 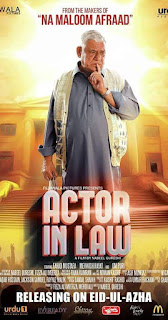 Script is well written and balances very well between the humor, storyline and social messages. Somehow I felt the script even though good and balanced, lacked loudness required for silver screen thus more appropriate for a telefilm. Nevertheless cinema hall was bursting out with occasional cheering on Fizza Ali's seemingly light and easy sarcasm, so something must have clicked with the big screen audience as well.
Film is shot esthetically , even the ordinary streets and court rooms of Karachi looked lively and colorful., which makes this movie very easy on the eyes.
Fahad Mustafa as a flop actor looks ordinary enough for the role, Mehwish Hayat is just ok as a Parsi out spoken journalist and Om Puri makes us connect to his disappointments as a father with ease. Rest of the cast does well also.

Playable Music, believable acting, laugh out loud comedy and stirring messages makes 'Actor In Law' a must go this Eid. I left cinema entertained , I go with 3 desi stars.
Awaken at 3:57 PM
Share