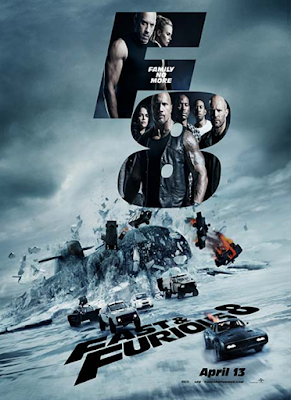 In Fast and Furious 8 (named Fate of the Furious in rest of the world but UAE) Dom played by Vin Diesel goes rogue suddenly and later we find that he is working for Cipher played by Charlize Theron. Cipher happens to be world’s best hacker and can literally hack in to anything, even random cars and submarine, which she can then control with the touch of a button. Rest of the screenplay revolves around Dom helping Cipher in getting her hands on Russian nukes and efforts of his team to stop him ,with the help of Shaw (Jason Stathom). Considerable portion of the plot focus on the reason behind Dom working for Cipher as well.
Screen play at times doesn’t make sense and left me with so many questions, like if she could control almost all the cars in Manhattan then how come she never tried to control cars driven by the team of Dom or I didn’t even get why in the first place she needed Dom for the job. But this was expected from the film and I will go as per my philosophy, which is very much applicable here, if the film is entertaining than we should ignore minor plot errors. Good thing about screen play is that it relies heavily on the action and humor elements, which makes it a lot easier to bear the overall nonsense. On a positive note, moments of situational comedy are good and blend well with the plot. 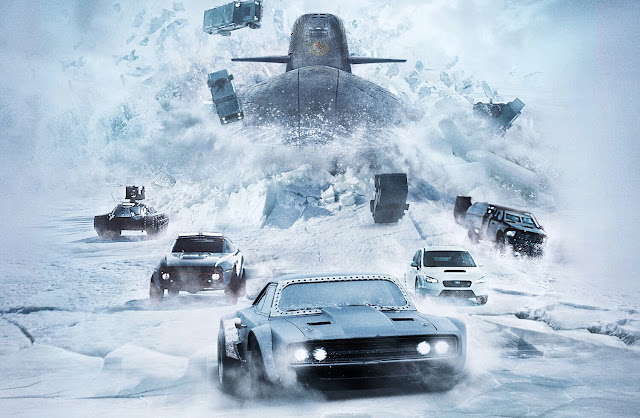 Car chase/action sequences are extremely loud and done to perfection. For the first time, we get to see a car zombie chase through New York and if you think this is it, then you are wrong. This time Dom’s team in fancy cars is not chased by tanks or an airplane but by a submarine on a frozen sea somewhere in Russia. I know it does sound unbelievably idiotic but trust me its also super entertaining. My only real complain, if we forget about the plot loopholes, would be the messy fast paced hand combat action sequences. I did not enjoy them, as I like crisp, still camera shot action where I can see every punch and expression but this is more like a personal preference rather than a problem. I am not sure what phase Charlize Theron is going through these days as her movie choices are getting weirder, last time I saw her in fancy gowns as evil queen and now she is Cipher a hacker in blond braids dressed as a rebellious teen. We find her mostly screaming at a computer screen here and I somehow expect more from an actress of her caliber. In these movies, there is usually not much to act and even here its the same. Everyone has performed well within the limited scope this screenplay offers especially chemistry between Dwayne Johnson and Jason Statham is great and elevates the level of entertainment.
Over all a very entertaining film with fast paced screenplay packed with larger than life car chase/action sequences. I go with 3 stars.