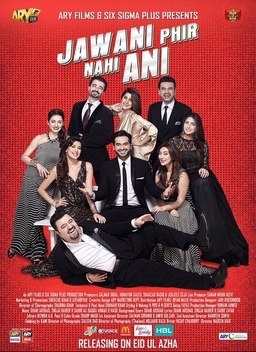 This Movie starts as the story of three friends who are bored with their routine family life and ends as being the love story of Humayon Saeed. This movie belongs to genre of comedy films like masti, house full, dhamal etc.

I guess the director is very much inspired by movies of Sajid khan. There is a point in film where Humayon saeed says yeh bhee sherry , mein bhee sherry which reminded me of yeh bhee jolly mein bhee jolly confusion from Movie House full.

Usually I start my review by narrating a part of story but in case of Jawani phir nahin ani I think it will not make much of a difference. There is no such thing as story. But it does not mean movie is not entertaining. It is equally entertaining as any leave your brains at home and have a good time comedy film.

One of the best Production I have seen so far after Waar. At least this movie gives you a silver screen experience and you don't feel you are watching a big budget Pakistani drama.
Every thing from editing to choreography  is spot on and is professional.

Actors have done a great Job , each one of them. Coming from Pakistan TV industry does work well for each one of them. It doesnot feel for a moment that for most of them its first or second movie. I enjoyed the diversity of characters from emotional Ahmed Butt to Westernized Sohai Ali. From possesive wife avatar of Ayesha khan to Pakhtun avatar of sarwat gilani. It is very refreshing to see Ismael tara as Arab Don and Bushra Ansari in her usual Saima chaudhry style character is good too.
Music is very easy on ears and songs like khul jay bottle , Jawani phir nahin ani have the potential to rock any club( private dance parties in case of Pakistan). Tarang and Fair & Lovely songs also can dominate the next shaadi season.


Overall a very good and entertaning experience. The only Issue that I have with this movie and this could be a personal choice related one is that I dont accept Humayon Saeed as a movie star. Apart from being a star of silver screen he was not as well fit for the role of a charismatic bachelor rather he looked more like father of Sohai. There is a part in the movie where he does tongue lip roll and that is something no one should be paying to see.


You will definitely enjoy this movie if you can:
1- Accept nudity in Pakistani film
2- Can leave your brain at home and don't stress on flaws in the story
3-Tolerate Songs every 10 minutes in the movie

Posted by Awaken at 6:42 AM No comments: