I am so happy today, this Eid long weekend started with a Pakistani film I have been waiting for, since Ho Mann Jahan. Finally, a Pakistani film where I have literally no issues with production/technical aspects of the film. Nadeem Baig has presented each and every frame of “Punjab Nahi Jaungi (PNJ)” beautifully. Every department like cinematography, sound mixing, music, makeup, set designs etc. down to every prop you see in a single frame is so well done and thought through that PNJ can easily give tough competitions to the traditional Dharma and Yash Chopra’s productions which usually have 10 times more budget than PNJ. 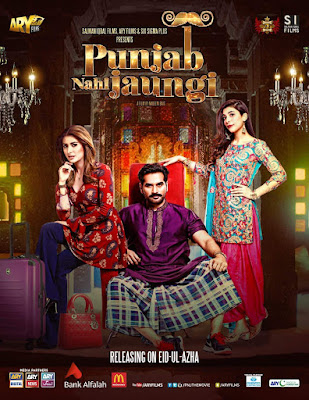 Story line is simple and Script relies heavily on performances. Khalil-ur-Rehman Qamar’s script is full of eloquent dialogues and uses Punjabi, English and Urdu playfully with the right balance. Punjabi and English lines usually are used in such movies for comic tones but here they are there throughout the narrative, even in the emotional and serious moments which gives the narrative and personalities a continuous characteristic. The balance/right choice of words never let these Punjabi/English comic tones to impact the intense moments in any way.
This film is advertised as a typical love triangle combined cultural family drama but I think it’s the perfect rom com. In fact, it’s one of the best rom com I have seen this season from all the three industries that I usually cover (Hollywood, Bollywood and Lollywood).
I have never understood why film makers still take Humayon Saeed as a hero. He is a good actor and all but I never really understood his appeal. Today while watching the Movie when my mom mentioned around 100 times that how amazingly handsome he look and how she wants me to look like him, I finally understood the appeal. He is very convincing as Fawad Khagga. But Mehwish Hayat takes the spot light for me. She delivers an intense multilayered performance with such an ease that is expected from seasoned actor only and her emotions echoe through the screen to you. Urwa Hussein is also the perfect fit as the jealous other woman. It is a delight to watch Suhail Ahmed and Naveed Shehzad as the grandparents. Suhail Ahmed has all the best comic lines and his impeccable comic delivery, adds to the humor quotient of the film. Rest of the cast is also good and gets their few moments to shine on screen as well.
As I mentioned earlier, production quality is top notch. Cinematographer creates one of the most beautiful on screen experience. everyone looks amazingly good. I have never seen Mehwish Hayat looked this divine before.
This Movie is well paced, well performed, visually pleasing and all the credit goes to direction of Nadeem Baig . His direction makes the simple screenplay shine through the performances of principal cast. He has used simple elements like sun rays to make ordinary indoors of a Karachi household look grandeur and on the other hand, he use a grand palace as haveli and turns it into a warm Punjabi home with just a family of four.

Music is good and memorable. Only one comment, If Ranjha song (which is filmed at Heer’s mausoleum) had a high scale singer like Sukhwinder Singh, then the whole scene could have been more intense as Shiraz Uppel’s voice is too soft. Choreography is fine also but I still don’t understand why Shabina Khan has to put Sharjeel (her baby brother) in Raat ka Nasha Song. He doesn’t look like an item enough to be in a party item type song. And If a choreographer really wants to be in the song, then he/she should be there for couple of second only, doing dance moves no one else can but any way these are negligible things.
Overall a well-directed, visually spectacular romantic comedy equipped with some soulful dialogues and impressive performances. It’s a perfect Eid entertainer, that is qualified for more meaningful title than just Punjab Nahi Jaungi , I go with 4 stars.