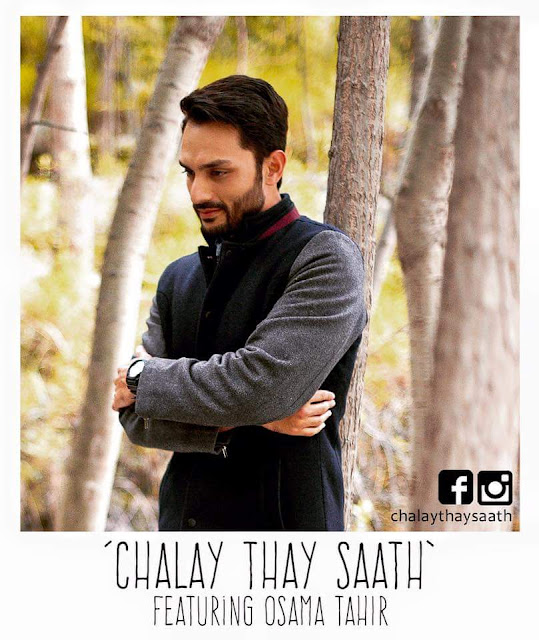 Chalay Thay Saath is Lollywood or as you may call Pakistan’s Film Industry new hope to break the streak of Flops recently. Film has been released and winning hearts already. We have already done the social connect with Kent S. Leung and Faris Khalid. So to complete the trio ,here I have Social Connect with the last leading male cast member of the film, Osama Tahir.


How does Social Connect works? We try to get in touch with Celebs on their official social media pages and ask them for a 5 questions interview. If we get a positive reply, then we ask for an official email address to make sure we are in touch with the right person. Rest of the interview and correspondence is purely on mail to stay true to the theme of the segment.

For Osama, just like Faris, I simply went with the Instagram account tagged by Kent. I must say this is the most simple yet honest interview I have done so far, which I think is also synonym to the his personality as well. Here is social connect with Osama done prior to the release of Chalay Thay Saath.

DDR 1 – In trailers and promotional campaigns we see you as a super cool, trendy, fun dude but who is real Osama Tahir?
Osama-well I'm a simple guy from a simple life. That's all I can say I suppose.

DDR 2- How did you become part of Chalay Thay Saath? Tell us a bit about your role.
Osama- I actually came and auditioned for the part. The director was happy with it, and I got the part! I play Zain in the film, Tania's husband who is played by Mansha Pasha. He's a complicated guy, an introvert who is stuck and is trying to just take one day at a time. Till he cracks, and his problems reveal and he's forced to deal with them.

DDR 3- As an actor how hard it is to be someone else in front of camera and be your true self off camera?
Osama-Since this was my first attempt in front of the camera as one of the leads, it was a challenge as my background is only stage. However creating the character and breaking out of it off screen only happens once the project ends. I can't say I was completely enveloped in the character throughout but it was slightly confusing to sometimes get into character and sometimes to come out of it.

DDR 4- What are the release plans for Dubai? Will you guys be visiting Dubai to promote it similar to Pakistan?
Osama-We do plan on releasing it there, I can't say for when, and hopefully I'll be there.

DDR 5- Tell us about your upcoming projects, where can we see more of you?
Osama-Well some projects are in the works. Definitely some stage plays. Let's see!


DDR-In the end, we would like to thank you for a positive response on social media and taking out time for our request for Social Connect Segment and We wish you all the best for future projects.
Osama-Thanks for interviewing me!
Posted by Awaken at 10:12 PM